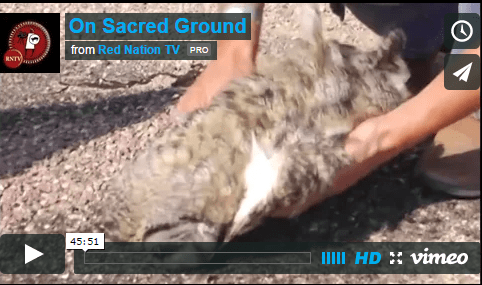 The peace and serenity that envelops Bear Butte Mountain in South Dakota seems an unlikely venue for activism. It is here, amid the bucolic grasses and flowers, the grazing Buffalo and wild life that the stage has been set for battle. While not Wounded Knee or Custer’s Last Stand it is still the stuff of history – and just as important to Native Americans. Whether they be Lakota, Cheyenne, Cherokee or Sioux, Bear Butte is a strong symbol of religious freedom and opposition to the white man’s continued ignorance, indifference and desecration of sacred Indian sites. “On Sacred Ground” follows the fight of the American Indian Nation and its supporters to overcome this ignorance through legislative efforts, use of media and hitting the pavement informing and enlightening those who, in many cases, have no idea the damage being done by their very presence. There is much to be gleaned from the elders who have gone before and those who would take their place in the hierarchy of the tribal lore. The red man and woman demand nothing – but elegantly requests respect for their beliefs, their shared history and sacred sites.
Director: Charro Wongittilin
Documentary Feature | Released: 2009 | Not Rated | 56 min.