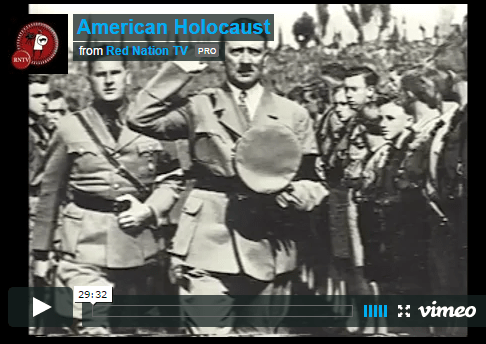 American Holocaust: When Its All Over I’ll Still Be Indian – THIS IS THE FIRST AND ONLY FILM TO DATE THAT ADDRESSES THE INDIAN AND JEWISH HOLOCAUSTS.

Romero’s documentary film “AMERICAN HOLOCAUST: WHEN ITS ALL OVER I’LL STILL BE INDIAN” has received many awards, including the Armin T. Wegner Humanitarian Award in 2005. Viewers can watch this film Red Nation Television Channel – Native is Here. www.rednationtv.com.

American Holocaust is very powerful and honest. It is probably more than most non-Indian people, and unfortunately, most Indian-people, want to acknowledge or hear. it is a laboring and sad truth that anyone who is truly Indian understands and lives with to some degree everyday. as polarizing as this movie is, it’s existence is critical for the hundreds of thousands of people that come to understand more about the real-story and for those that need to reflect and heal as they walk their own red-road. thanks for sharing these voices with me keep it up…

“American Indians have every right to despise white folks and curse us, rather than bless us. And yet, there are leaders like Romero who boggle the typical pedestrian mind. Like Nelson Mandela, she is a prime example of forgiveness in action. Mandela had every right to call for a bloodbath when he was finally released from prison in South Africa. Mandela-like, Romero stands on his mighty global shoulders and calls for oneness, love and what she describes as female energy.” –partial quote

American Holocaust: When It’s All Over I’ll Still Be Indian

This powerful, hard-hitting documentary reveals the link between Adolf Hitler’s treatment of German Jews and the U.S. government’s treatment of American Indians depicts disturbing parallels between these two Holocausts and explores the historical, social and religious roots of America’s own “ethnic cleansing.” The film also examines, through the words and experiences of contemporary Indian people, the long term lasting effects of this on-going destructive process and the possible ramifications for the future of American Indian people in the 21st century.

2005 Armin T. Wegner Humanitarian Award for “the vision to see the truth and the courage to speak it”
2003 The Fargo Film Festival
2000 The American Indian Film Festival (San Francisco)