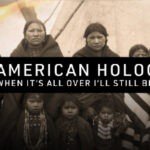 This powerful, hard-hitting documentary reveals the link between Adolf Hitler’s treatment of German Jews and the U.S. government’s treatment of American Indians depicts disturbing parallels between these two Holocausts and explores the historical, social and religious roots of America’s own “ethnic cleansing.” The film also examines, through the words and experiences of contemporary Indian people, the long term lasting effects of this on-going destructive process and the possible ramifications for the future of American Indian people in the 21st century. ** June 2016 Romero became a lifetime member of The Academy of Motion Picture Arts & Sciences American Holocaust: When Its All Over I’ll Still Be Indian – Is the only film to date that addresses the American Indian and Jewish Holocausts. Romero is the only Native filmmaker to make the Academy’s Documentary Branch shortlist in a preliminary round. Romero’s film was entered into the OSCARS for consideration in 2000 in which 22 short films were entered that year. Then the Academy’s Documentary Branch determined the shortlist in a preliminary round of voting in which 9 were chosen for consideration. […]